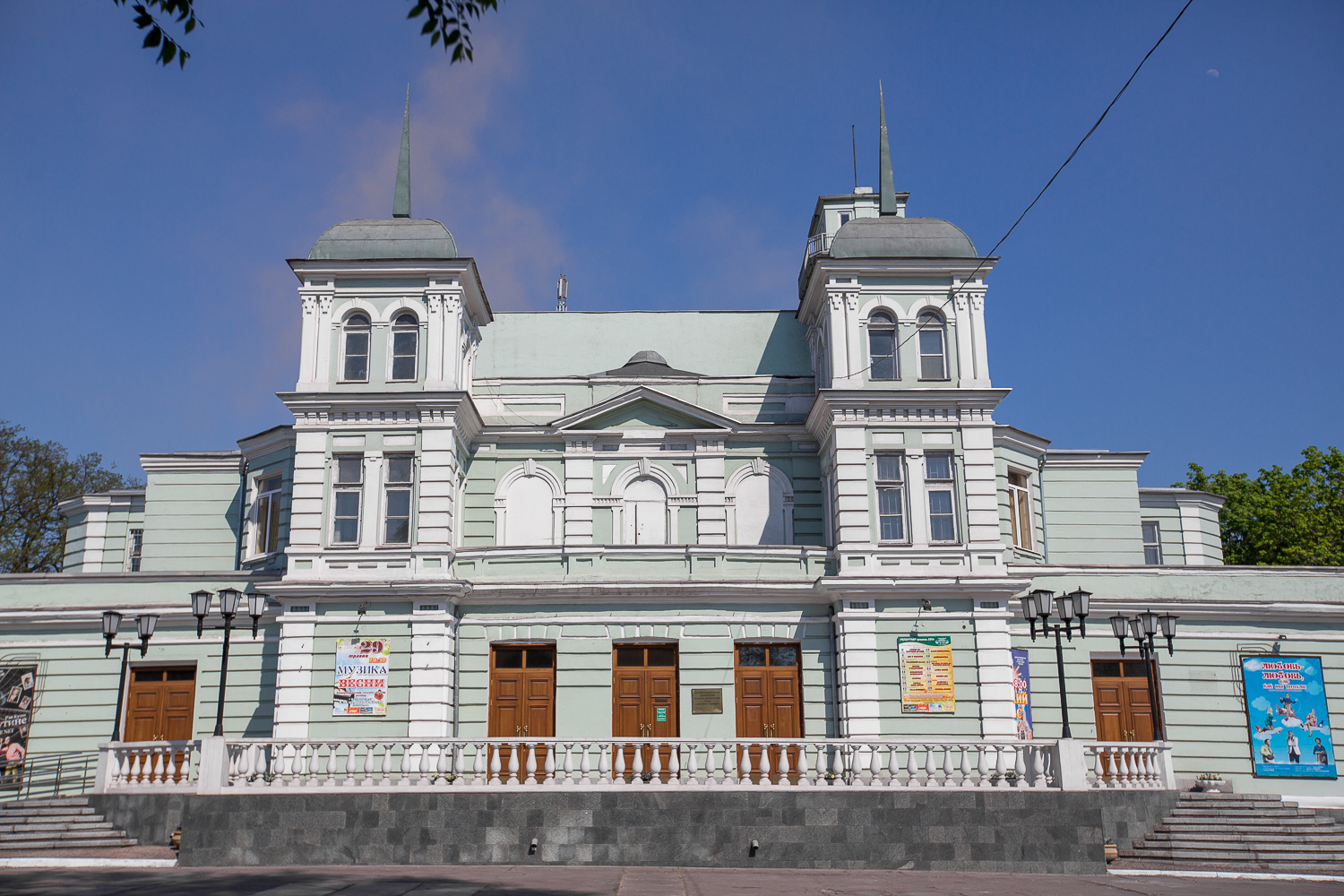 1900- The people's audience was built with the help and support of Ignaty Yasyukovich. He was director of the Dnieper Metallurgical Plant.
1900-1917- Professional and amateur troupes show performances. The performances of Ukrainian, Polish and Russian troupes had a great success.
1920-1935- On the base of theatrical troupe under the direction of N. Lopatetsky. At the initiative of workers of the Dneprovsky factory M. Malkin and R. Mamontov. They organized a Working Youth Theater. It had worked by 1930.

10.08.1935- The Theater of Russian Drama. M.M. Khataevich was opened in Kamyanske. Art Director was Petr Kastalsky.
1935-1937- The new theater was a success. More than 10 performances were staged according to the plays of Soviet play writers and foreign classic. Creative and serving staff was replenished to 100 people.

1937- Kamyanske was renamed into Dneprodzerzhinsk. Mendel Khataevich (leader of the regional organization of communists) was arrested and declared a spy of Trotskyi , his name disappeared from the name of the theater. P. Alekseev was nominated director.
1940- Boris Tyagno became an art director. He was a student of Les Kurbas.

1941- The theater troupe was evacuated to Kazakhstan due with the beginning of Great Patriotic War. The city was occupied by the Nazi.
1941-1944- Dneprodzerzhinsk theater of Russian drama works intensive in evacuation in Leninogorsk (modern name - Ridder), then in Guryev (modern name - Atyrau). Artists had been creating a 33 new performances for a 3 years. Most of them is patriotic: "Battalion goes to the West" by G. Mdivani, "The keys of Berlin" by K. Finn and M. Gus, "Russian people" by K. Simonov, "The Kremlin Chimes" by N. Pogodin. Classic: "Glass of water" by E. Scribe, "Late Love" and "Guilty Without Guilt" by A. Ostrovsky, , "Cunning and Love" by F. Schiller, "Wedding of Krechinsky" by A. Sukhovo-Kobylin, " Scapin's tricks". In the former public audience building worked Ukrainian Theater of Drama. It was organized by Germans. 13 performances of Ukrainian classic plays, "Marco Otava" by O. Senik about Ukrainian Holodomor in 1933.
1944- The theater returns to the liberated city without Boris Tyagno. He was appointed an art director of Odessa Ukrainian Theater.

1956-1962- The Theater tours in all major cities of Ukraine, Russia and Belarus. The performances always sold out in Dneprodzerzhinsk. Honored artist of USSR Peter Avetikov-Avdienko was appointed an art director.

1962- In connection with the issuance of the decision of the Soviet government on the reduction of the city's theatres, Dneprodzerzhinsk, Ukrainian drama theatre. Lesya Ukrainka ceases to exist.

1980- More than 10 enterprises of the city take part in the reconstruction of the building. Honored Artist of Ukraine Semyon Tereykovsky was appointed an art director of the new Theater. The All-Union Creative Competition was announced to form the troupe.
02.06.1981- The first musical performance was "Temp-1929" by N. Pogodin.

1981-1990- Time of rapid development. Isaak Dubov (1982-1983) spires to staging with actual problems. Honored Artist of Ukraine Nikolai Maltsev (1983-1988) likes traditional realistic and psychological theater. Gennady Pimenov (1988-1990) likes a serious, sharply social and modern plays. The young Theater tries to feel its viewer in the conditions of global changes in the socio-political life of the country. Musical comedy: "My Beautiful Lady" by F. Lowe, "The Night Stranger" and "Russian Secret" by B. Racer, "Wedding in age" by A. Galin, : "Do not give up fire, Prometheus!" by M. Karim, "The Holy of Holies" by I. Drutze, "Dinner for five" by E. Vetemaa, "Threshold" by A. Dudarev, "The Heart of a Dog" by M. Bulgakov, " The track" by V. Arro. Ballet: "Facet", "Choreographic Offering”, "Counterpoints", "Fatoum" by A. Bedychev. "Cinderella" by E. Schwartz, "Adventures of Pinocchio" by A. Tolstoy, "Birthday of the cat Leopold" by A. Hight, "The Nightingale" by G. H. Andersen had a great success.
The theater tours at all the regional centers of Ukraine, Russia, Belarus, Moldova, Kazakhstan.
1990- the art director of the theater is Sergei Chulkov. He prefers classic. «Mirandolina» by C. Goldoni, «Nelskaya Tower» by A. Dumas, «Twelfth Night» by W. Shakespeare, «Cunning and Love» by F. Schiller.
1993- the theater festival "Classic Today" was established on the basis of the theater at the initiative of the art director Sergei Chulkov and the chief of the literary L. Kostenko.
1995- The building was laid up for repairs. The financing of the theater is stopped, the salary is not paid Theater leaves many talented people because of economic difficulties. Sergei Chulkov was among them.
1997- Honored Artist of Kazakhstan Margarita Kudina was appointed as a chief of the Theatre. Sergey Chulkov returns to the post of art director. Repair is completed with the support of the city authorities and enterprises of the city. Sergei Chulkov staged the "Maria Stewart" by F. Schiller. The classical repertoire is supplemented by the comedy "Inventive Love" by Lope de Vega and "The Stone Master" by Lesya Ukrainka. There are modern comedies and dramas, and performances for children.
2000- The name of Lesya Ukrainka was returned to the Dneprodzerzhinsk Theater.